This week marked the release of Legend of the Fire Princess, the first original graphic novel in the world of She-Ra and the Princesses of Power. Like many fans, after eagerly awaiting the release, I received a copy of the novel and read through it immediately. If you are curious about the story, have yet to read it, or are simply a fan of these characters, read on for my full review.

Also, beware of some minor SPOILERS!

Within the hardback binding are 128-pages of beautiful full-color illustrations and the nostalgic ink-and-paper scent of a Scholastic book fair. The story jumps to action immediately, relying on lovely art and witty dialogue; it feels pleasantly similar to watching an episode of the show.

Set sometime mid-Season Three, Entrapta is working with the Horde and picks up on a strong First One’s tech “energy signal”–the Spirit Ember. She, Catra, and Scorpia embark on a journey to collect the Spirit Ember, an ancient and infamous runestone, and bring it back to the Horde. Likewise, in Bright Moon, the Princess Alliance learns of the runestone and of Catra’s plans to steal it. The princesses, and Bow, set off to foil the Horde’s plans, eager to possibly harness the power of the Spirit Ember for the Rebellion.

As with the Netflix series, the graphic novel revolves around themes of friendship. As the legend goes, the Fire Princess had a best friend and “the two of them had know each other since their earliest years, when they had sworn to be close always” (D.G. 12), but their friendship dissolved as the Fire Princess chose power over maintaining her relationship. She noticed her mistake too late, and upon seeing that her best friend had moved on, the Fire Princess lashed out, channeling her pain into hurting those around her.

This story sounds familiar, doesn’t it?

As the novel progresses, we see the development of several key relationships. We see the rocky, but hopeful friendship between Catra and Scorpia, as Scorpia goes out of her way to care for, support, and protect the angry Force Captain. There are several pages of comedic excellence from Scorpia and memeable expressions from Catra. 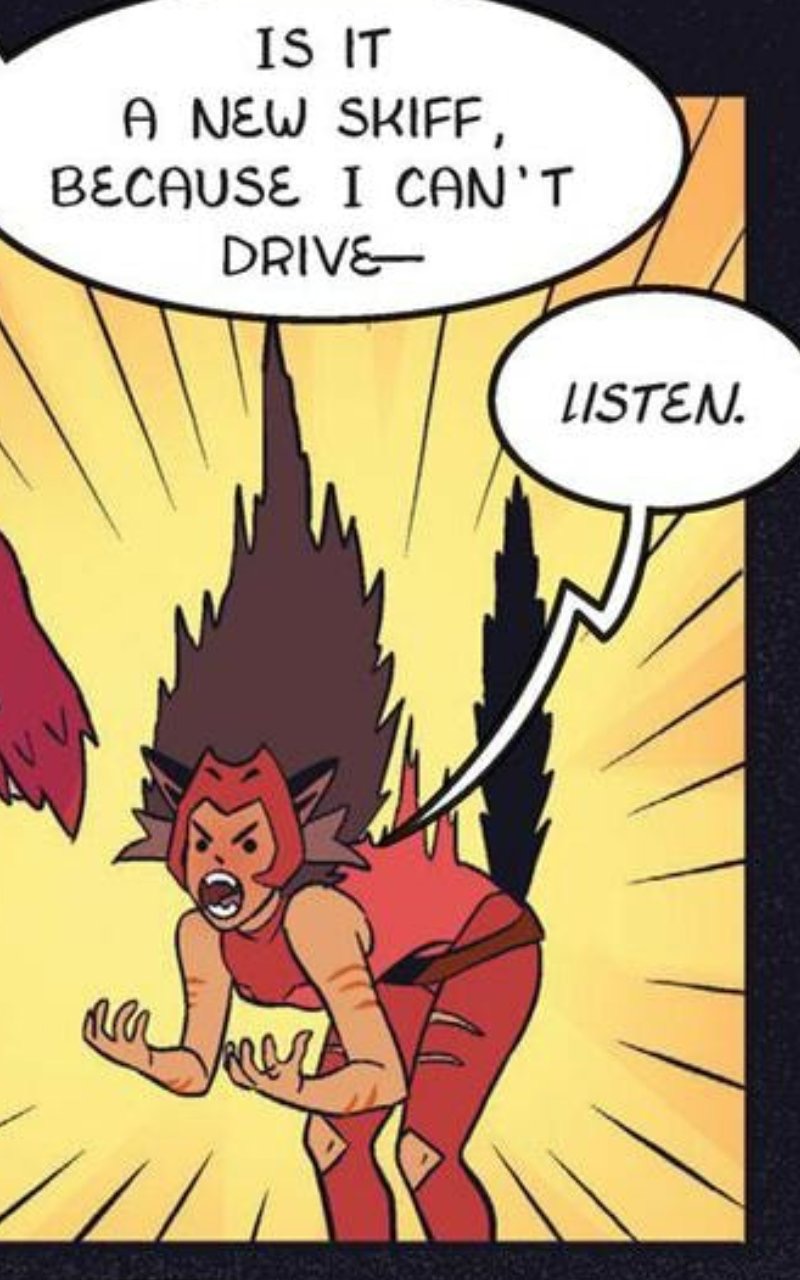 We also see the Princess Alliance work together, sometimes irritating one another or pushing each other too far, but always there with love, support, and appreciation of each other talents in the end. I appreciated how the creators made sure to include all the Princesses; Mermista and Frosta never fail to make me laugh, and its cool to see them in this new medium.

And lastly, everyone’s favorite: we see development in Catra and Adora’s strained relationship. The two share lingering, uncertain gazes, nervous sweats and faint blushes. They also fight–and they fight hard. She-Ra narrowly misses slicing Catra with the Sword of Protection and Catra curb stomps She-Ra on the floor of a cave. In various panels, Catra just sits on top of Adora. I think it’s a cat thing. The action is fast and dynamic; illustrator Paulina Ganucheau excellently captures the fluidity we expect from animation, but on the page instead. The pair lash out violently because, as with the legend of the Fire Princess, both girls are struggling to cope as their best friend moves on, without them. Near the novel’s conclusion, Adora confides in Glimmer, saying, “[The Fire Princess] seeing her best friend move on without her is what made her go berserk, right? …I think I’m starting to get it” (D.G. 124).

From a technical perspective, the graphic novel is beautifully done. The colors, done by Eva de la Cruz, are vivid, the pallets similar to the show and representative of the characters. Dark, almost sickly greens and reds for Catra in the Fright Zone, and warm pinks and purples for Adora, surrounded by friends in Bright Moon. Paulina Ganucheau’s interpretations of the characters are amazing; I particularly like how expressive she made Catra’s ears and tail and how she drew She-Ra’s hair swooshing over her face in the midst of battle. Even the lettering, by Betsy Peterschmidt, is unique and shows personality.

Overall, I enjoyed Legend of the Fire Princess. The novel is a great addition to the canonical She-Ra world, adding even further complexity to these already complex characters. Reading it felt like watching another episode of the show. The book is perfect for all fans of the series, though considering the wide age demographics who enjoy the show, I would say the book is oriented more toward the younger fan base. The chapter books are marketed to early readers, around ages 7-10, and I think the graphic novel would fit in that demographic and with the middle readers as well.

(But take that all with a grain of salt; I’m in my twenties and I liked it, so.)